Climate Activists and Experts Warn: "It is Time to Act Now" 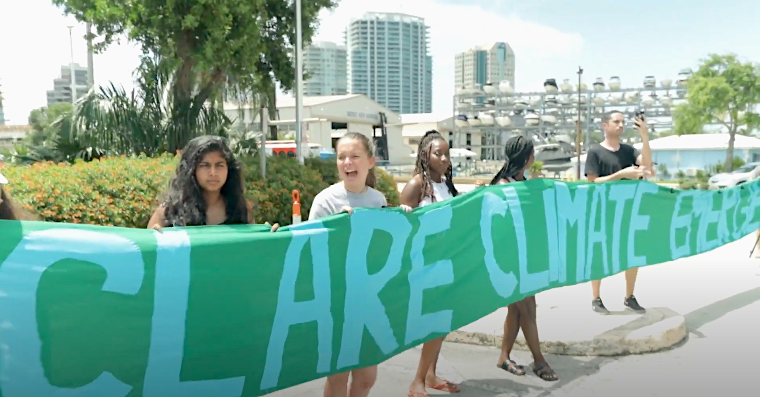 “When our athmosphere is under attack, what do we do?” yells 16-year-old Samantha Gazda in front of Miami City Hall.

“We stand up and fight back!” chants back a small crowd of 15 teenagers and young adults. They are holding a huge banner that says with upper-case letters, “DECLARE CLIMATE EMERGENCY!”

Motivated by the neglect of their own government regarding the climate crisis, these young people are part of the global movement Extinct Rebellion (XR). This environmental movement started in the United Kingdom in 2018 and has grown into a network of more than 485 groups across 72 countries. Through non-violent protests and civil disobedience, they aim to compel world leaders to take urgent action to address climate change. Some activists of Fridays for Future, a global movement led by the Swedish activist Greta Thunberg, were present in this protest as well.

“Carbon emissions have risen 60 percent since 1990 and we have seen no action from our government,” said the XR and Fridays for Future protester Nicholas Vazques, 22.

In 2018, the Intergovernmental Panel on Climate Change (IPCC) released a special report highlighting the importance of limiting global warming to 1.5 degree Celsius above pre-industrial (1850-1900) levels. The report indicates that greenhouse gas emissions, which contributes to the warming of our planet, need to fall by about 45 percent by 2030 in order to prevent potential catastrophic impacts on ecosystems, human health and well-being.

According to the National Oceanic and Atmospheric Administration (NOAA) 2019 Global Report, the average temperature of our planet for the year of 2019 was estimated to be 1.1 degrees Celsius since the industrial era. It means that 2019 was the second warmest year on record, behind 2016.

The report also mentions that “the global annual temperature has increased at an average rate of 0.07°C (0.13°F) per decade since 1880.”

But what can really happen if the temperature of the planet continues to rise?

Activists with Extinction Rebellion and Fridays for Future know the answer and so do scientists, researchers and professors in South Florida: ice melt, coral bleaching, sea level rise, floods, droughts, extinctions, health problems, heat stress, not to mention a change in migration patterns.

“In South Florida we are already seeing the impacts of global warming,” said Jayantha Obeysekera, head of the Sea Level Rise Solutions Center at Florida International University (FIU). “I was in Key Largo yesterday and there is one neighborhood that has been flooded for 45 days because the tides have been high.”

Nikki Traylor-Knowles, an assistant professor of marine biology and ecology at the University of Miami (UM), worries about the future of marine populations, especially coral reefs.

“Approximately 75 percent of the world’s corals are under threat due to climate change,” she stated. “They are not only important for marine life, but also for people. Corals protect our coasts against storm and flood damage.”

Danilo de la Torre, a student at FIU, organizes strikes in Miami as part of Fridays for Future. He emphatically questioned, “When your bathtub is overflowing, what do you do? Do you reach for the towel or do you turn off the tap?” He then answered, “Right now all we are seeing from our representatives is just people going after the towel. It is going to be more expensive to adapt to a worsening climate than it is to mitigate its effects before it happen.”

The clock is ticking.

As the FIU sea-level rise expert Obeysekera stated, “It is going to get a lot worse in the future. It is time to act and join the global efforts to reduce our carbon footprint and the emission of greenhouse gases.”

A PhD student at FIU, Nadia Seeteram, sheds light on possible solutions to the problem.

“We have to stop emitting fossil fuels. We have to switch to renewable energy. We also need to get carbon out of the athmosphere whether that means planting a lot more trees, mangrove forest restoration or using plants that can be carbon syncs.” Seeteram also mentioned the equity implications of climate change. “Climate change affects people not equally. In developed countries we are responsible for CO2 emissions more so than people in developing nations. People in developing nations are less likely to be able to respond well.”

A report by the British charity Oxfam released in 2015 shows some impressive statistics. It estimates that the richest 10 percent of the global population produces 50 percent of Earth’s carbon emissions, while “the poorest half contribute a mere 10 percent.” Oxfam proves Seeteram’s point when it says that its analysis “helps dispel the myth that citizens in rapidly developing countries are somehow most to blame for climate change.”

Claire Paris-Limouzy, a professor of ocean sciences at the UM, is very worried about the implications of our actions on future generations. “We have to do something about climate change because we are the cause of it. We can’t leave it as a heritage to our children,” she said.

Indeed. Future generations are the ones that are going to suffer the most from our reckless actions, or lack of actions instead.

To lessen the impact of climate change, XR and Fridays for Future activists call for collective action and individual changes, like using public transportation, eating less meat, recycling and using renewable energy. However, Vazques is not afraid to say, “They would like for us to focus on individual changes but we know the truth. This is not going to be solved at an individual level. This is a systemic problem.”

Back to Miami City Hall, the protest fiercely continues.

“When our lives are under attack, what do we do?” shouts Gazda.

“We stand up and fight back!” replies the young climate activists.

After the protest ended, we sat down to talk to Gazda, who did not hide her feelings, “You know, looking back on my childhood, no one told me anything that was going on. Once I realized what was happening to our planet it was just a wave of terror,” she said. “Resiliency and empowerment, that is my legacy.”

For more information on the climate crisis, please visit our digital series If Not Now, When?